Backpacking in Japan is a great way to travel inexpensively while experiencing the beautiful sights, welcoming people, safe environment, and unique culture waiting for you. Read on to find out what to consider when trekking across Japan-from transportation, to lodging, food, entertainment and even Japan Travel WiFi. Japan doesn’t have to be expensive! What we cover:

Backpacking in Japan on a Budget

Many backpackers in Japan make use of the Japan Railway Pass, an exclusive pass for foreign tourists permitting unlimited train travel on JR routes within the jurisdiction of the pass. The pass can be bought for 3, 7, or 14-day increments and for specific regions only or for all of Japan. The pass can save you a ton of money on train travel, especially on the fast but usually expensive bullet trains. The initial cost of the pass is high but can easily pay for itself a couple times over when backpacking in Japan.

Another way to travel inexpensively is by using overnight highway buses. These are far cheaper than trains but also less convenient and comfortable. Still, you can’t argue with the prices, which are dirt cheap on some of the most travelled routes such as Tokyo to Osaka. One of the most popular highway bus companies, Willer Express, has the Tokyo to Osaka route for as low as 3,700 yen in the off season! A train ticket on the shinkansen for the same route would cost about 10,000 yen more than that.

If you are traveling long distances, take a look at domestic flights in Japan as well. Low-cost carriers such as Peach have made flying cheaper at times than taking the bullet trains. You do have to factor in the cost and convenience of traveling to and from the airports, but it can be worth it for long distances.

Many backpackers consider the option of hitchhiking in Japan. We offer no opinion one way or the other on this option, however, you can find a wealth of information on this topic on travel websites and forums as well as in books such as the practical Hitchhiker’s Guide to Japan (published 1998) or the entertaining Hokkaido Highway Blues (published 2003).

Hostels are plentiful in Japan’s bigger cities, and are cleaner than you will find almost anywhere else in the world. You can expect to pay about 2,500-3,500 yen per night for a bed in a dorm-style hostel. You can also try offering to work for your room instead by cleaning the rooms for a few hours a day.

Capsule hotels are another option (mainly for men) in big cities. For around 3,000 yen a night you get a small cubicle to sleep in. They are bare-bones but usually have TVs, privacy curtains, and shared baths.

Couchsurfing is not yet widespread in Japan, but hosts are friendly and generous, so this is an excellent option to get accommodation at no cost and meet new people at the same time! AirBnb is another option gaining popularity in Japan and if you are willing to share an apartment or a room in an apartment you can often find places to stay for as cheap as a hostel.

The high cost of food in Japan is often overstated. Some things are certainly more expensive than in other countries, but local food can be had fairly cheaply. Some hostels also have kitchens, so if you plan ahead you can try making your own Japanese food on the cheap!

Breakfast sets with toast, eggs, ham or sausage, and lettuce can usually be found at cafes for around 400-600 yen.

Ramen, rice bowls (donburi), and curry are filling and cheap lunch options. Rice bowls can be found as cheap as 300 yen at chains like Yoshinoya. Curry and ramen will generally cost about 500-700 yen.

Consider buying dinner at supermarkets or the basement of department stores after 7 p.m. at night. Set meals are marked down 50% after a certain point. Conveyer belt sushi restaurants are not only a fun experience, they can be a very cheap way to get your fill of decent quality sushi. Plates with two pieces of sushi start at around 100 yen each.

Cheap Things to Do in Japan

Entertainment in Japan, from sumo to robot restaurants, can be expensive. Some tourist attractions have discounts for foreign travelers so make sure to bring your passport; there are also many experiences you can have inexpensively or even for free.

Many museums (especially smaller ones or publicly-funded ones) have very inexpensive admission (as low as 150-300 yen). The Hiroshima Peace Memorial Museum for example is only 50 yen. The Atomic Bomb Museum in Nagasaki is 200 yen. The largest museum in Japan, the Tokyo National Museum, is 620 yen. The price of museums in Japan is quite reasonable compared to the United States and Europe.

There are also many beautiful parks in Japan, even in big cities like Tokyo. These are especially beautiful during the plum and cherry blossom seasons, when you can enjoy flower viewing while eating a picnic lunch.

Temples and shrines are also wonderful cultural experiences that can be very inexpensive. Many have free admission or only charge admission for entrance to certain parts of the grounds.

Seeing a festival in Japan is a unique cultural experience, but some major festivals can be expensive as the cost of nearby lodging usually skyrockets. If you want to see some of Japan’s many wonderful festivals (like Kyoto’s Gion Matsuri or the Sapporo Snow Festival), book accommodations far in advance or consider staying in a nearby town. There are also plenty of local options for festivals throughout Japan’s summer months, where you’re likely to come across a seemingly endless number of municipal festivals occurring each weekend.

Japan has a temperate climate so extreme weather is not a big concern. Southern Japan, Okinawa and Kyushu, have hot summers and mild winters. Tokyo and Kyoto are also very humid in the summer but colder in the winter. Some areas of Japan do get heavy snow in winter, including Nagano, Tohoku Prefecture, and of course Hokkaido. Layers are key. The rainy season (around June) is another thing to look out for as the downpours can be quite heavy! Luckily cheap umbrellas and ponchos can be found at any convenience store.

Backpacking in Japan doesn’t come without tourist hassles: getting lost whether it’s “in translation” or “on the map” can be frustrating. This is where reliable WiFi can become your best friend. If you’re planning a cross-country backpacking adventure through Japan, we particularly recommend using a Sakura Mobile Portable WiFi Router, which offers reliable coverage throughout Japan all the way from the seaside beaches of Okinawa to the slopes of Hokkaido’s Niseko Ski Resorts. And if you’re planning to spend your time exploring one of Japan’s many robust metropolises, then a Docomo Data SIM Card is another great option for staying connected with your smartphone or iPad.

Backpacking in Japan is a great experience and very easy due to the excellent transportation system and the friendly nature of the Japanese people. Even at a low cost, you can experience the cultural wonders of Japan! 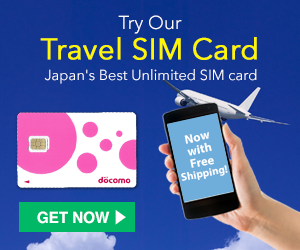