In mid January three members from Sakura Mobile took a trip to the ski-resort, Moyoko Akakura Onsen in Niigata, to snowboard in the bliss of powder snow and to visit our friends who runs a lodge/restaurant ‘Edelweiss Akakura’. There we had a wonderful time learning how to snowboard (we can call ourselves intermediate now), enjoying hot spring, and also took the opportunity to test the connectivity and durability of our pocket WiFi and Sim card in the remote location that Akakura Onsen is.

The beauty Akakura Onsen reflects the sacredness of the mountain which until 200 years ago was forbidden to enter, as it was thought to be a holy mountain where Gods reside. It is a perfect environment for skiers who wants to enjoy traditional Japanese culture as well as enjoying high-quality snowing and relaxing spring bath – as it is a small traditional Japanese village famous worldwide for its powder snow. Akakura Onsen is increasingly becoming a must go resort for serious skiers and snowboarders around the world. Especially for people coming from foreign countries, because Akakura Onsen is relatively English friendly while not overridden with western vibes, unlike many of more mainstream ski resorts in Japan.

The village despite being small, had all essentials you need for skiing/snowboarding, socialising, and eating out. Myoko Akakura Onsen is in an isolated area of Niigata, but it is easily accessible by car, bus or a train from Tokyo, Osaka, or Nagoya. The place is not far from big cities compared to other ski resorts in Japan such as in Hokkaido. There were skiing area for beginners to advanced. For those little more courageous it also had jump ramp and rails – very deep inside the mountain there was a Ski jumping slope as well. We are sure that whether you are a beginner or advance you can enjoy Akakura Onsen. Sakura Team was invited by friends in ‘Edelweiss Akakura’ to snowboard with them. Living most of our life in Tokyo, we did not have much experience of snowboarding. However, because of the powder snow we were able to practice more diligently as we were not scared to fall because of the softness of the snow. Once we were able to snowboard without falling, the feeling of floating on white sea of snow traveling at a high speed became very addictive. It will surely be an activity we would like to include as our hobby, we will definitely go back there next year!

Testing our WiFi and Sim card in Akakura Onsen

For us, who takes internet connection seriously as skiers and snowboarders do with powder snow, it was not enough to just snowboard. We thought since the resort, being located in a very remote area of Japan (as many ski resorts are), have weak internet coverage, it was in our duty to test the connectivity of the pocket WiFi (which is a small portable router) in an extreme condition with low internet coverage. The aim of the test was to see if we are indeed offering the best WiFi. (Just on a technical note, testing the connectivity of pocket WiFi effectively means that we are testing our SIM card as well. This is because a SIM card is inserted into a pocket WiFi to make it work [SIM card on its own are usually inserted in mobile phones, with mobile phone acting like a router]. We tested our connectivity with pocket WiFi, because for foreign mobile phones depending on the device you have, connectivity can differ in Japan. So, if you are going to a remote area in Japan we recommend you to take a pocket WiFi with you.) So, we set of with our pocket-WiFi and mobile phones in our front pocket and set off to test our device…

What we found was that first we were able to connect with high connectivity everywhere in Akakura Onsen – astonishingly we were even able to connect on the top of the mountain and have video call via Skype! And, despite the minus temperature, tumbling around in snow and being outside all afternoon, pocket WiFi continued to work all day long maintaining its high connectivity. Also, when we were travelling from Tokyo to Akakura Onsen, our pocket WiFi worked in all remote areas that we passed. Just as what one of our customer who visited another remote Ski resort in Furano, Hokkaido, wrote to us ““battery life was amazing. Two of us had these and neither had issues with battery, including when at the snow in -15 temps, [and] internet coverage was great…”, so we have confidence to say that you will be able to stay connected wherever you are! Look here to see why Docomo Service offers the best coverage.

We interviewed a number foreign visitors to Japan visiting Akakura Onsen and asked if they knew about rentable pocket WiFi and Sim cards in Japan. Many did not know and wished they had known before coming to Japan.

We also asked what they thought about internet access in Japan: All of them answered that they found it difficult to access internet especially in remote areas, including Akakura Onsen. If any internet access were found they were either not free, needing to be registered (usually in Japanese), or slow. Also, as we have written back in October last year on our blog, free internet access in public places may be dangerous.

One place that had free internet access in Akakura Onsen was inside the lodge ‘Edelweiss Akakura’. The place offers lodging and has restaurant for lodgers and non-lodgers (also providing meal menus in English). It is a popular place for Japanese and foreign visitors – so we would recommend you to go eat there and use its WiFi. The best thing we found about the lodge was it was located inside skiing area. The lodge also provided all the necessities for skiing or snowboarding, so you can get snowboarding or skiing right away!

All foods were delicious and well priced. We had tonkatsu curry (we did not have ice cream because we did not want to be too bloated for skiing – although it was very tempting!). The restaurant It is right in the middle of the ski resort so you can just pop in, refuel, and go back out to ski in no time.

Just as we thought our Wifi worked in Akakura Onsen, a remote area of Myoko. Our investigative (fun) trip there showed that our pocket WiFi was the best you can get, in terms of getting connectivity in remote areas of Japan. Just as we had much fun snowboarding in Akakura Onsen with internet, with Sakura Mobile we are sure that you will be able to enjoy your time skiing or doing whatever in remote areas of Japan while staying 100% connected! 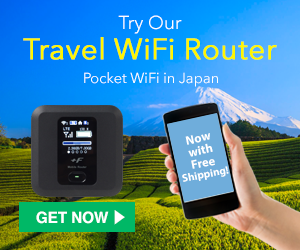